I went to the In-N-Out Burger's pop-up held at Columbus Coffee Co, a local cafe along Upper Thomson Road. And, I actually waited close to 2 hours starting from 9.50 am to eventually get my burger. The first in the queue was there since 6.30 am for this 3-hour pop-up event. In-N-Out Burger is a popular brand in Los Angeles, USA and this was their third pop-up in Singapore so far. The first was at Golden Grill restaurant at Boat Quay in 2012 and the second was at Timbre at Gillman Barracks in 2014. 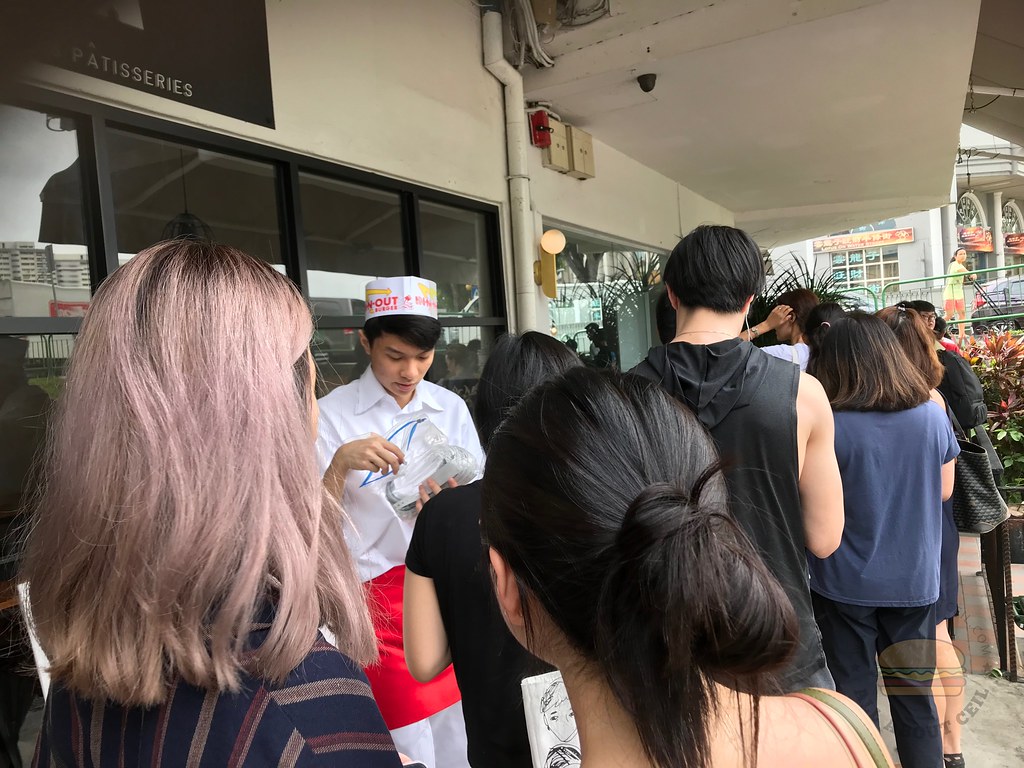 We were greeted by a snaking queue right outside the cafe that stretched along the walkway and extended all the way to the coffee shop at the corner. Each customer is only allowed to purchase one burger. Their staff was giving out the plastic wrist tags in colors of gold, red, silver and yellow while we were in the queue and a total of 320 were given out. The portion that has "BURGER" was then torn off when waiting in the queue to order, this is likely to prevent reordering. 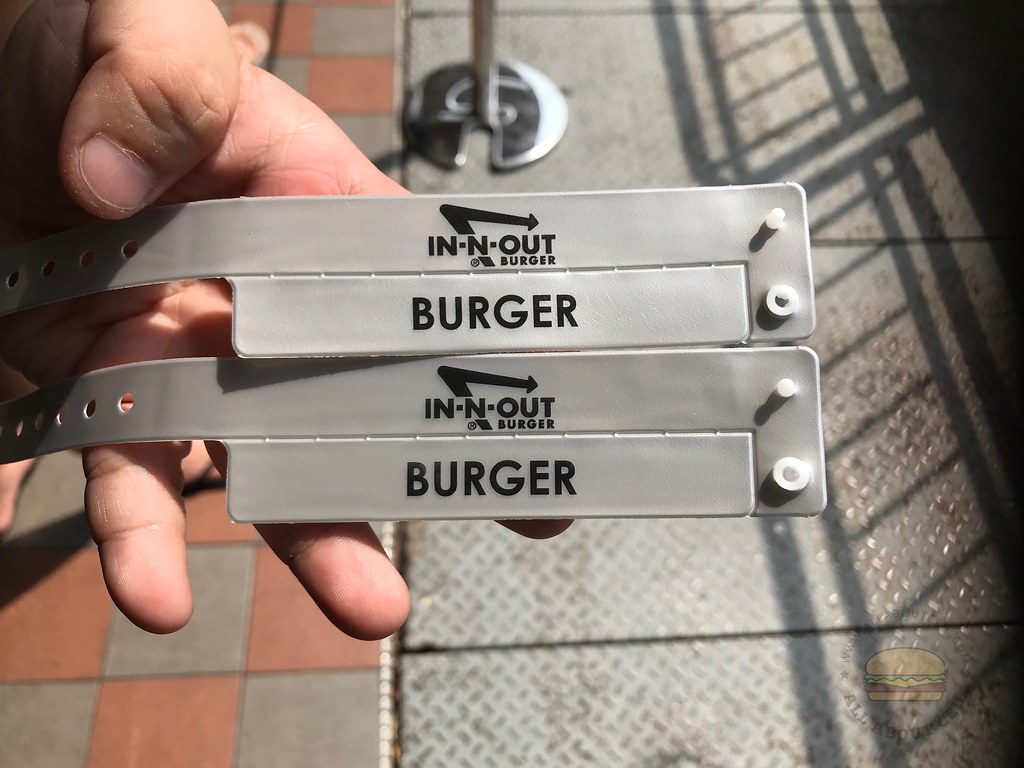 The counter was decorated with wallpaper that has its registered iconic palm-tree trademark. We were given a commemorative keychain upon entering the cafe. We were to order at the counter. The menu consists of Hamburger ($3), Cheeseburger ($4) and the Double-Double ($5). The T-shirts were available for $ 4 each. They started serving as early as 10.00 am though it officially starts at 11.00 am. The customers enter into the cafe in the batches of 5 pax each time. 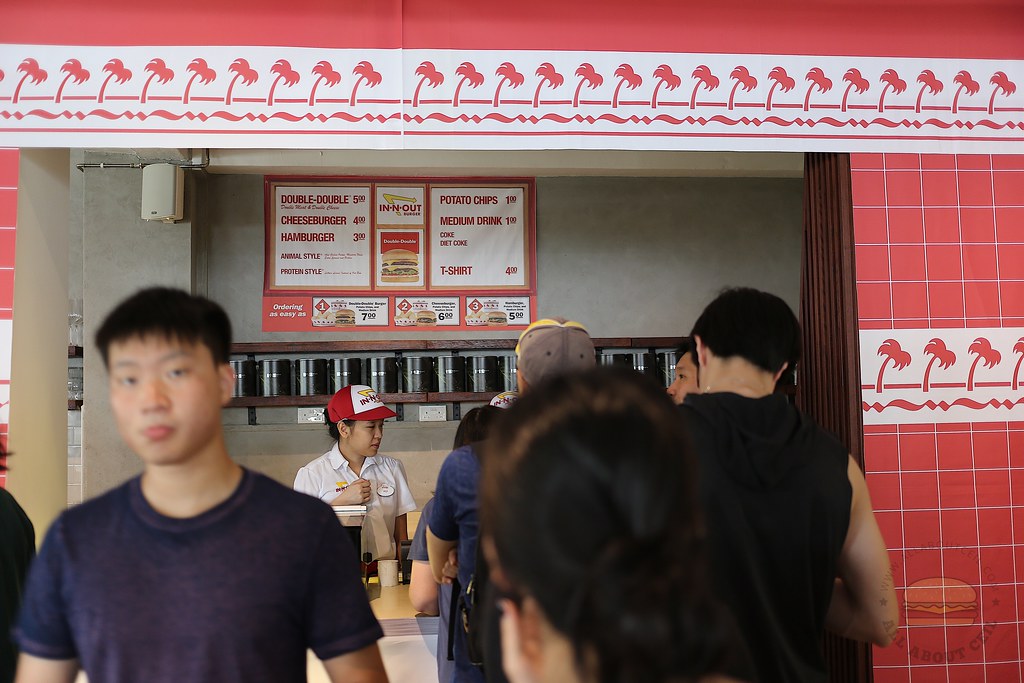 Eric Billings, the In-N-Out's Manager of Special Foreign Events was there, interacting with the customers. They can do just 300 burgers in 3 hours without compromising on the quality. There were 3 chefs flew in to train the staff in making the beef patties and assembling burgers with ingredients like slices of cheddar cheese and buns that were bought in from the US. Their burgers are famous for freshly handmade patties made using US ground chuck beef. 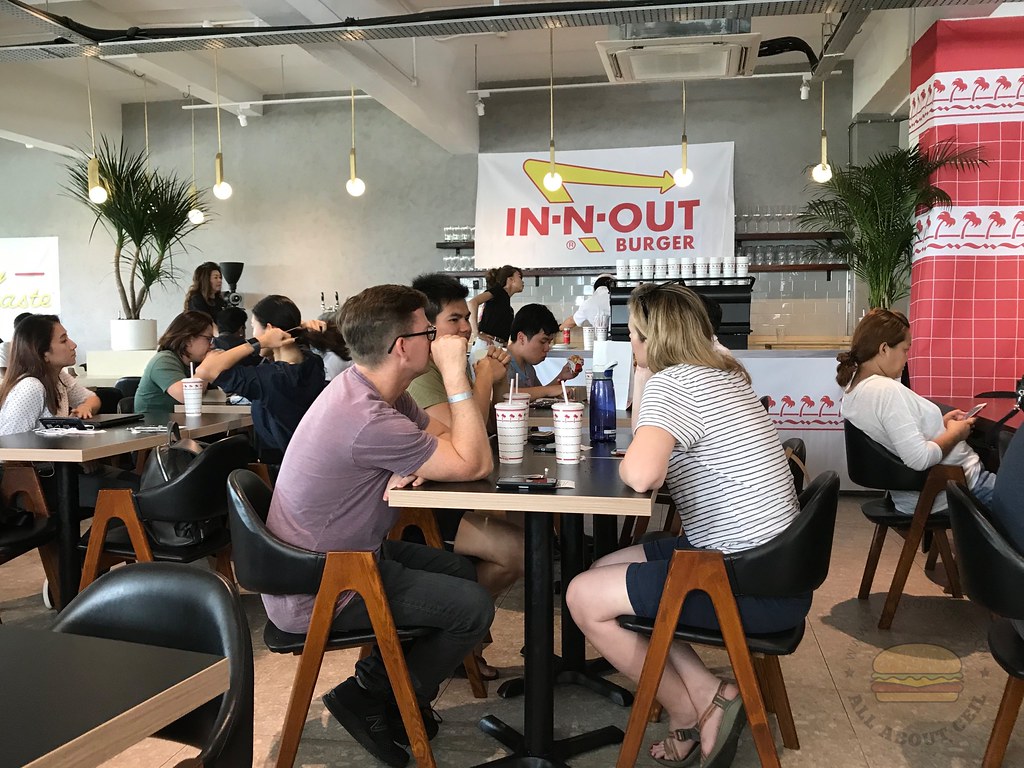 It was served with a portion of salt & vinegar chips and a soft drink at $7 per set with the Double-Double burger, slightly cheaper than their pricing in the USA. An order number was given on the receipt and it was delivered to the table by service staff. 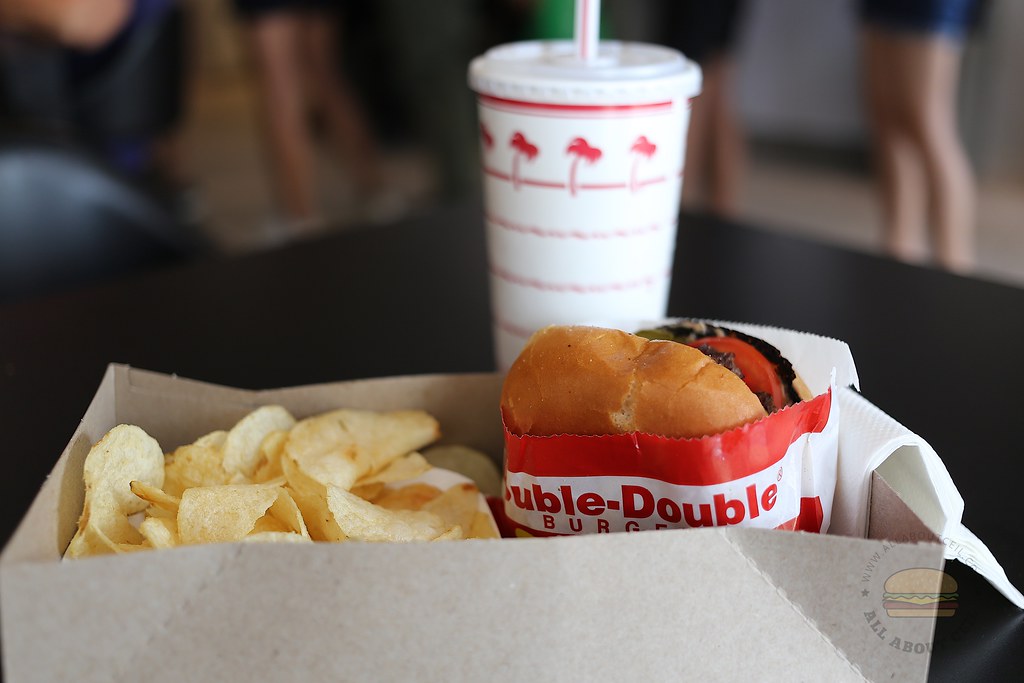 After queueing for close to 2 hours, the Double-Double is the obvious choice. I opted for the Animal Style that was served with double grilled hamburger patties and double slices of thick cheddar cheese sandwiched between buns with pickles, caramelized onion, pickled radish, lettuce, and tomato with their special sauce called "spread", consisting of Thousand Island dressing. 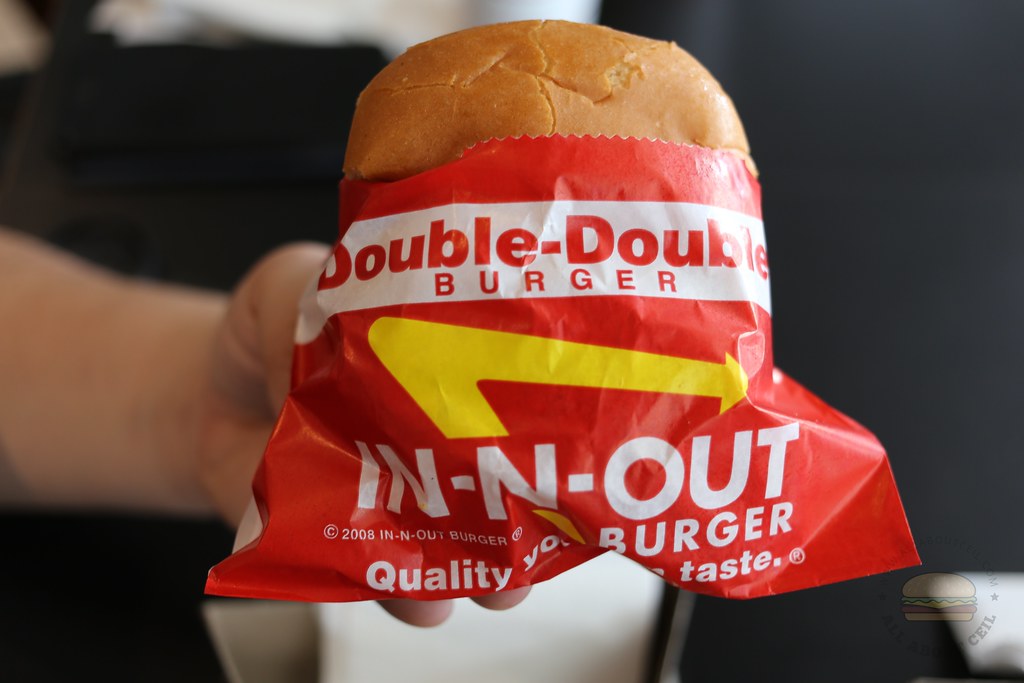 The burger was good though not quite as good as Shake Shack, which is still my favorite choice but it is definitely better than the Fatburger and other fast food restaurants in Singapore. I would think that the standard at this pop-up was supposedly higher as compared to their day-to-day operations over in the USA. 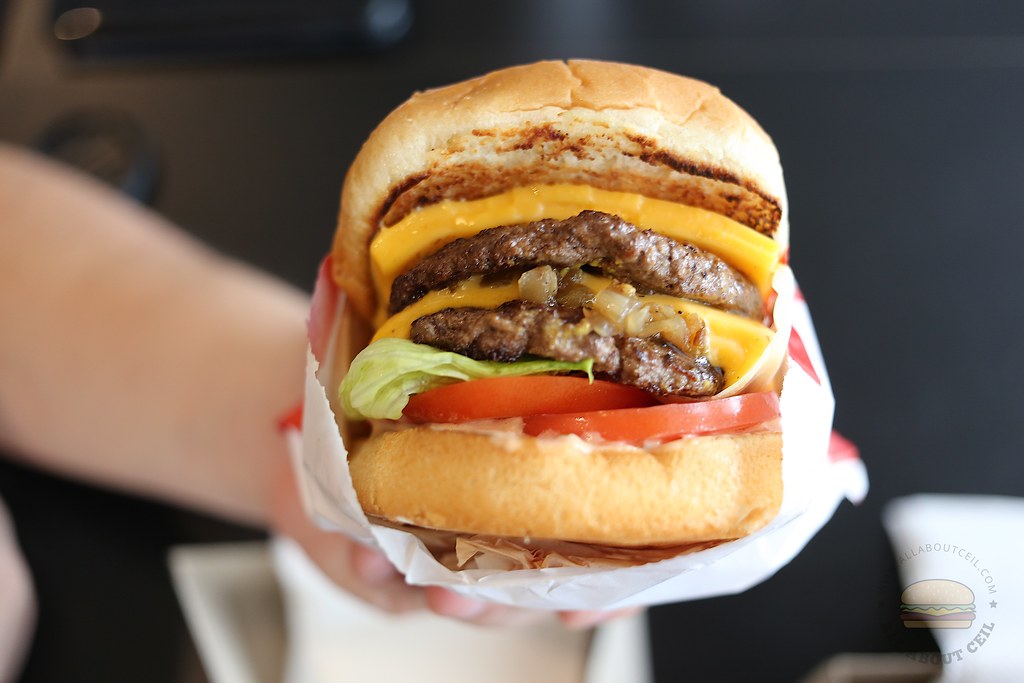 Apparently, there is no plan for In-N-Out Burger to actually open a permanent restaurant in Singapore. Their outlets are all located on the west coast of the USA as they have yet to venture overseas. The good news is Shack Shake is planning to open its first store at Jewel Changi in Singapore tentatively next month.  Meanwhile, I am still waiting to find out how much longer would the Fatburger that has 2 outlets in Singapore will be sustaining. It was a good experience after all but I doubt I would want to queue that long for a bugger again if there is another pop-up maybe a few years later. 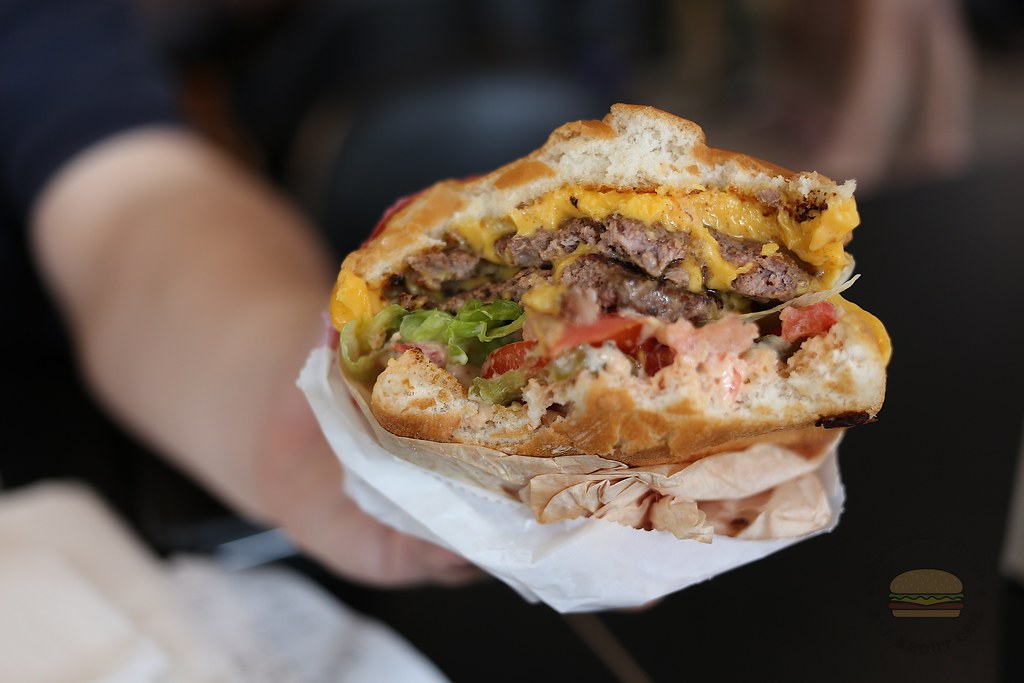